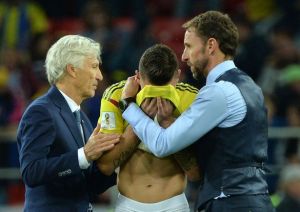 On Monday I finished a 6000 word paper on shame. I’ll be presenting this at a conference called ‘When Woman Speak’ in Melbourne on 15th-18th August. Obviously, it’s a huge honour, as well as being vaguely terrifying! In it, I decided to focus on how to find healing from shame. However, following England’s first ever successful penalty shoot-out in a football cup competition, I may have to slightly re-work my conclusion.

For some time now, I’ve come to think of my shame as a stone. A huge rock that when I’ve stepped out in courage and vulnerability has come crashing down, threatening to crush me entirely. I picture it having fallen on me as if I were a healthy and verdant plant, with a stone now lodged at it’s core. Because it didn’t kill me, or completely destroy me. In fact, over the years, I’ve grown to accommodate the stone and have continued to flourish and put out new shoots in spite of it. Yet there are moments when the pain, disappointment and rejection that the stone represents gets triggered all over again, and I’m re-shamed or right back in, what Jill McNish calls, “the godless vortex.” (Transforming Shame: A Pastoral Response, p.143)

So, as I embarked on my paper and, at the same time, found myself back in that wasteland of hopelessness and desolation, I told God I could not live with the stone anymore and I needed to find a way to be rid of it once and for all. One of the ways I thought this might be possible, was to reframe the story I tell myself in order to make sense of the shame I’ve experienced. But, I guess I’ve always struggled with this idea because it seems a bit forced or artificial. I concluded, therefore, that maybe what I needed was some profound divine encounter to heal me from shame. I have a good friend who has written a wonderful and encouraging testimony of how God has done just that! I’m totally thrilled for her and can see the amazing transformation that has been brought about as a result of God’s healing. However, that is her story and not mine.

Then, I thought, well maybe this reframing of my story just happens naturally over time. I’ve observed how already when I recount previous life events what I include and leave out changes. Some things no longer seem relevant at all and other incidents take on new meaning given the unexpected or surprising twists our life journeys take. When, on Tuesday, I was presented with a modern day parable.

The England football team, managed by Gareth Southgate, who’d failed to score the penalty that knocked England out of Euro ’96, were once again confronted with their nemesis – the dreaded penalty shoot out. In the weeks leading up to the game, there has not been a press interview or article that has not reminded us of past failure and disappointment. And actually, in that moment, as Harry Kane stepped up to take the first spot kick after extra time, I wondered if perhaps we had to hold our nerve, face our collective fear and come out the other side having finally broken the ‘hoodoo’. A nation held it’s breath, and we came through victorious! But what I found remarkable, was not only that due to his previous experience Gareth Southgate was able to show such empathy to the young Columbian player who missed his penalty, but that he’d said to his players, “you do not have to be defined by the past, we write our own stories.”

Rather, then, than expecting the stone to be removed, I think I will decorate it and turn it into a thing of beauty. For, maybe, I need to accept that shame will always be a part of my story. But by acknowledging it and redeeming it, I believe I can now move beyond it into a brighter and braver future. 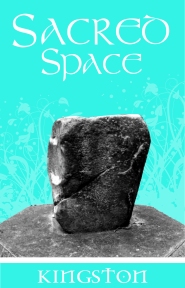